I migliori della Serie A

Goalscorers, emerging stars and a dream debut in our look back at the last round of Serie A fixtures

On a big stage against a tough opponent, the 18-year-old from Milan performed brilliantly after being handed a start by De Zerbi following injuries for Consigli and Pegolo and it’s a match he’ll never forget. His saves from Ronaldo, Dybala and Ramsey were of crucial importance. The years go by and seeing as he was born in 2001, he’s now the first Generation Z goalkeeper to play in Serie A and he deserves applause for his performance. 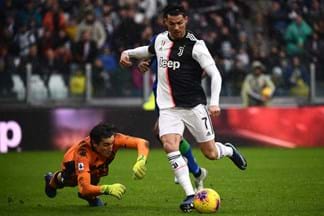 With a brace against the Friuli side, his goal tally has moved up to an incredible 17 for the season. His side really count on his prolific goalscoring abilities and there are few players around who are so clinical. Truly outstanding form.

After scoring a crucial winner, he deserves a mention along with his work rate and self-sacrifice. Liverani brought him off before the final whistle after he gave more than 100%.

He’s an extremely important player for De Zerbi as he combines his goalscoring ability with an ability to link the play and help his teammates. He got the assist for the Boga goal before scoring the goal that gave the Emilian side the lead.

The best Italian performers on matchday 20 according to the media

The best Italian performers on matchday 19 according to the media

The best Italian performers on matchday 18 according to the media