History of the FIGC

The Federazione Italiana Giuoco Calcio was founded in Turin on 26th March 1898 and played its part in making football the most important sport in the country. The same year and again in Turin, the first championship was played in a single day with Genoa winning and sewing the first Scudetto with the Italian flag onto their chests. 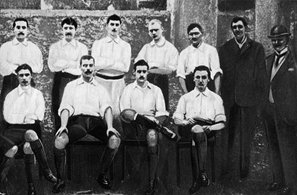 The National Team made its first appearance on 15 May 1910 at the Arena in Milan. Dressed in white, Italy beat France 6-2. The next year against Hungary, the side played in blue for the first time in a tribute to the House of Savoy. Unfortunately, the First World War suspended activities between 1916 and 1919 with a large number of directors and players falling in the conflict. The arduous recovery didn’t prevent the Azzurri from taking part in the 1920 Olympics held in Antwerp or the 1924 games in Paris. The side’s development continued with bronze medal success at the 1928 Amsterdam Olympics under Head Coach Augusto Rangone.

It was the most successful period in the history of the Italian National Team who were able to win two Central European International Cups, the World Cup twice and an Olympic gold in the space of ten years.

Vittorio Pozzo was the architect behind this success. He became the sole coach in 1929 and remained in the post until 1948. It was a decade of great players with the goalkeeper Combia, the defender Monzeglio and the exceptional Ferrari along with the non-Italian born players Monti, Orsi, Guaita and Andreolo. In attack, the stars of Schiavio, Giuseppe Meazza and Silvio Piola shone, with the latter the third-greatest goalscorer in the history of the team with 30 goals from just 34 matches.

The Azzurri’s run of wins began in 1930 with triumph in the Central European International Cup, that would later become the European Championship, and this was repeated in 1935. In 1934, the World Cup was won in Rome with a win over Czechoslovakia in the final at the Stadio Partito Nazionale Fascista. Then, there was gold at the 1936 Berlin Olympics and a second consecutive World Cup triumph with a win over Hungary in the final. 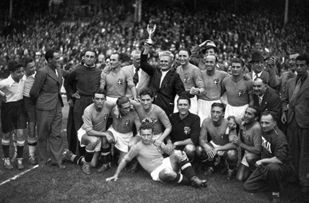 On top of Europe

After the war, Italy returned to regular action in 1947 with a large core of players coming from the legendary Grande Torino side. For the match against Hungary on 11 May 1947, ten of the eleven players in the starting line-up came from Torino. Later, the Superga air disaster on 4 May 1949 left the National Team without Valentino Mazzola and the other great players from the Grande Torino.

Dark years followed for the side and Italy failed to qualify for the 1958 World Cup after being eliminated by Northern Ireland. The lowest point of all came on 19 July 1966 when the Azzurri were knocked out of the World Cup in England by North Korea in Middlesbrough. 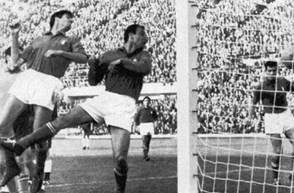 Their return to glory came with the 1968 European Championship held in Italy. The team progressed from the semi-final against the Soviet Union thanks to the toss of a coin. The final against Yugoslavia went to a replay before Italy were eventually named European champions on 10 June 1968.

At the 1970 World Cup in Mexico, Italy featured in the greatest match of all time. Italy beat Germany 4-3 in the epic semi-final known as the ‘Game of the Century’, decided by a Rivera goal as the Azzurri made it to the final against the unbeatable Brazil side who took the crown. 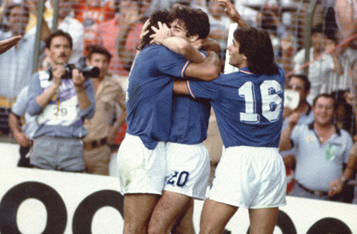 Italy were able to celebrate again when Enzo Bearzot’s Azzurri won the World Cup for the third time in Spain. Once again, there was pessimism and controversy at the start. But after leaving Vigo and moving to Barcelona for the second round, Italy were able to beat Argentina and Brazil in two epic matches. The semi-final against Poland paved the way to the final against West Germany who were well-beaten. Italian football entered the 1990s with a sense of enthusiasm after the country was selected to host the 1990 World Cup. Goals from Schillaci cleared a route to the semi-final against Maradona’s Argentina. After going out on penalties, we finished third after beating England in the play-off.

The ‘magical nights’ continued four years later at the World Cup in the United States. Sacchi had replaced Vicini and Italy started USA 94 with a thousand issues looming over them. The turning point came in the round of 16 when the class of Roberto Baggio helped overturn a two-goal deficit against Nigeria. The Golden Ball winner did it again against Spain and Bulgaria, scoring the two goals to reach the final against Brazil. However, Italy were then beaten on penalties with Baggio missing the final spot-kick. 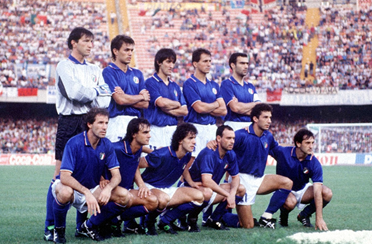 Cesare Maldini’s Under-21 side provided consolation after the disappointments of Italia 90 and USA 94 with three European Championship wins between 1992 and 1996, followed by further wins under different coaches in 2000 (Tardelli) and 2004 (Gentile). 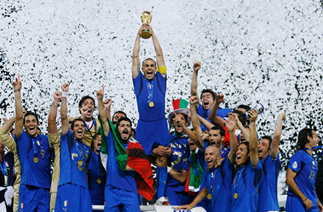 The 2006 World Cup came at a difficult time for Italian football and the Federation itself. However, Lippi’s Azzurri were calm in Germany and, for the fourth time in history, Italy were crowned champions of the world, beating France on penalties in the final. The following year, Giancarlo Abete was elected as FIGC president and would be re-elected in 2009 and 2013 (he was also named Vice-president of UEFA in 2011). Cesare Prandelli’s team delighted Italians at EURO 2012, reaching the final, where they were eventually beaten by Spain. Then, in 2014, going out in the group stages of the World Cup in Brazil signaled an end to the terms of both head coach Prandelli and President Abete. Carlo Tavecchio then took up leadership of the Federation and brought Antonio Conte in as head coach for EURO 2016, in which Italy went out in the quarter-finals at the hands of Germany. The new-look governing body made a raft of changes for the good of Italian football, especially in terms of using homegrown players, on the economic sustainability of Italian professional clubs. They also change the structure of the FIGC and launched a variety of campaigns and initiatives to tackle racism and discrimination. In order to further guarantee total operational transparency, the FIGC began to publish a series of documents: the Football Report, the Integrated Balance, Management Report and Economic Standing of Italian football. General Director Michele Uva was elected UEFA Vice President in 2017.

In the meantime, Gian Piero Ventura’s side become the first Italy team in 60 years to fail to qualify for a World Cup after being knocked out of the play-offs by Sweden in November 2017, which saw Tavecchio relieved of duty and a General Assembly created to decide his successor, though no suitable candidate was found. Roberto Fabbricini was nominated by CONI as Interim Head Coach before, three months later, Roberto Mancini took charge of the team.

On 22 October 2018, Gabriele Gravina became FIGC President by a landslide, securing 97.2% of the votes. Two years after missing out on the World Cup in Russia, Mancini guided the Azzurri to qualification to EURO 2020 by a record margin, winning all of their qualifying group games. That tournament was postponed until 2021 due to COVID-19 but what a tournament it was. Italy continued their hot streak that year by reaching the Final Four of the Nations League, which was hosted in Milan and Turin in October 2021. On 22 February 2021, Gravina won a second term as the Federation’s President, beating challenger Cosimo Sibilia. Two months later, the FIGC President was elected to the UEFA Executive Committee with 53 votes out of a possible 55. On 13 May 2021, for the occasion of Giovanni Malagò becoming the President of CONI, Gravina also become football’s representative within the Italian National Olympic Committee (CONI). On 11 July of that year, Italy beat England on penalties at Wembley to become European champions for a second time, their first title since 1968. Eight months later, however, Italy were once again forced to miss out on World Cup football after defeat to North Macedonia in the play-offs in Palermo.