At the end of an epic game under a monumental downpour, the Azzurri progress thanks to Zurlo’s penalty winner. Hat-tricks for Ramacciotti and Gori and one goal for Corosiniti

In the midst of a tropical storm that made the feat even more impressive, Italy triumphed 8-7 over Russia in extra time in order to reach the Beach Soccer World Cup final for the second time in history, the first coming back in 2008. Italy will now face Portugal in the final on 1 December at 22:00 CET, looking to win their first World Cup in history. This is an unprecedented final between two teams who have met 35 times before, with Portugal having won the tournament once back in 2015. 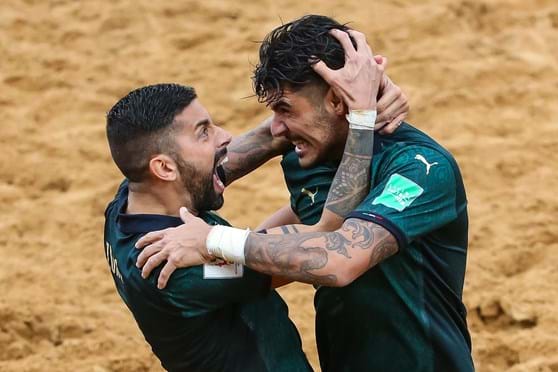 The Estadio Mundialista Los Pynandi was the arena for a special evening on Saturday, with the Azzurri defying expectations to beat Russia in Asuncion. A high tempo, beating rain, a heavy pitch and a great competitive spirit: these were the ingredients that led to a crazy, fantastic and topsy-turvy game. 15 goals were scored in 39 minutes, seven of which came in the final period and three of which came in a single minute. Simply put, it was a game that will live long in the memory. It was a hard-earned victory for the Azzurri, who actually led by two goals midway through the third period and remained in the lead until 80 minutes from the end of normal time. In the end, it was Emmanuele Zurlo’s penalty one minute into extra time which deservedly won it for Italy. The frontman, who had already played a starring role in the quarters against Switzerland, was ice-cool under enormous pressure as he scored his ninth goal of the tournament and 113th for the National Team. Prior to Saturday’s clash, the Azzurri had always been beaten Russia on the biggest stage. But this time it was different. 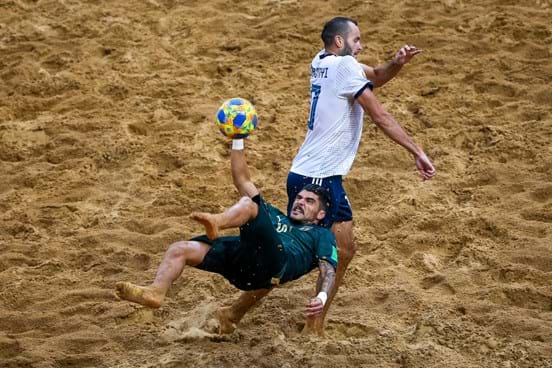 It was Dario Ramacciotti who scored the match-winning hat-trick, and he is the player who has really stepped up and carried the team forward in their last two matches. Two excellent strikes and a poacher’s finish gave Italy energy and momentum at key times in the match. It was also Ramacciotti’s first time scoring three goals in a single World Cup match and he could not have chosen a better moment to break that personal record. He’s now scored 106 goals for Italy, with eleven of those coming at World Cups. Gabriele Gori also netted three times against Russia, having made his return from injury. He scored all three of his goals in the final period, bagging a brace in just a matter of moments after the start of the third period. With a scissor kick from the halfway line, a sharp finish from a tight angle and a perfectly placed shot, Gori brought his goal tally up to 292 for the Azzurri, with 16 of those coming at this tournament alone. Italy’s captain Corsoniti opened the scoring for the Azzurri with a header from a corner. It was a wild game for both fans and neutrals, with Russia taking the lead three times; at the start of the match, in the twelfth minute of the second third and in the first minute of the final twelve minutes. But the Azzurri went in front four times; in the tenth minute of the first period, in the third minute of the second third, in the third minute of the final period, and crucially in the first minute of stoppage time. Almost all of Russia’s seven goals were completely unstoppable and Italy kept themselves in the match when they were trailing thanks to a heroic rearguard action from Del Mestre, Carpita and Chiavaro.