A strong third period was enough as the second period which Portugal won 2-0 proved decisive. Zurlo, Ramacciottii and Josep Jr. with the Italy goals

The Azzurri’s dream ended at the hands of a ruthless Portugal side who did well to make the most of the opportunities they created. On the sand pitch at the Estadio Mundialista Los Pynandi in Asuncion in Paraguay, Portugal won 6-4 against Italy to claim their second World Cup title after doing so in 2015. The key moment was six minutes into the second period when Jordan and Andre scored two goals to fire Portugal ahead. Like in 2008, Italy went down at the final hurdle as a tenth Zurlo goal at the tournament wasn’t enough, it was his sixth in the last four games. Ramacciotti hit two goals as Italy kept battling and competing in the third period. The Viareggio scored six goals in the knockout stages. Gori missed a penalty at a key moment but finished as the tournament’s top scorer on 16 goals. The 19-year-old Josep Jr had the honour of scoring in the final of his first World Cup.

Reigning champions Portugal claimed the World Cup title thanks to a Jordan hat-trick. He plays in Italy and has been named the best player of the year in 2019. Italy performed excellently in the first and third periods, scoring four goals, creating chances and hitting the woodwork twice. Between the sixth minute of the second period and the third of the final period, Portugal hit the four winning goals with two coming in a matter of seconds. Halfway through, Andrade saved a penalty from Gori. In the third period, Italy performed like in previous games with chances for Marinai, Percia, Montani and Zurlo while Corosiniti and Gori hit the woodwork while Portugal were clinical and took every chance. After the whistle, a disappointed Corosiniti was able to look back clearly on the match. “For the work we’ve done over the past years, the team deserved this title. In the end, this final was decided by dead balls. We hit the bar twice when we could have got back in the game and the final slipped out of our hands from then on and we couldn’t get back into it. I’m happy that lots of people followed us from home, this is a beautiful sport and you fall in love with it when you discover it.”

Following the match, the side received congratulations from FIGC President Gabriele Gravina. “The Beach Soccer team isn’t a dream that has finished but one that goes on! I thank the players, staff and organisational staff for this World Cup silver medal but above all for exciting the Italian fans and winning over people who were curious about the sport. The FIGC and LND believe a lot in this form of the game and will keep investing to help it grow internationally and domestically.

Portugal ran the risk of not qualifying for the World Cup after losing 4-3 to Italy at the European Qualifiers in Moscow before navigating their route to Paraguay after the playoff against Spain.

LND President Cosimo Sibilia also applauded what the side achieved. “Despite everything, it’s impossible not to be proud of our Azzurri. They wrote a new an incredible page in the history of Beach Soccer. The LND has always believed in and supported this sport and will continue to do so in order to keep Italy at the top of the International game. The players and Coach have given their best in this competition, carrying the Italian colours and those of our league high as it remains one of the most competitive in the world.” 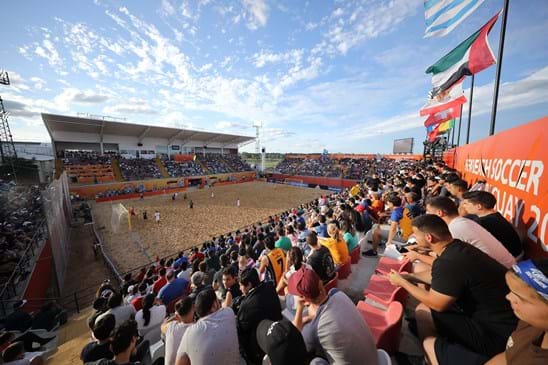