Coach Del Duca’s team are into the final four of the World Cup for the third time in a row thanks to a last moment goal from Zurlo. A hat-trick for the forward and first goals of the tournament for Josep Jr and Ramacciotti

Italy, who were two goals down at the end of the second third, pulled off a great comeback against Switzerland. Coach Del Duca’s team shifted into top gear, grabbed a hold of Switzerland and scored the winning goal with the final kick of the game. A crucial 3-1 scoreline in the final third sent the Azzurri into the semi-final. Italy repeat their feats of 2015 and 2017 as they join the other three teams in the final four of the Beach Soccer World Cup. The match certainly wasn’t one for the faint of heart. It’s the fourth time Italy have reached the semi-finals, (2008, 2015, 2017 and now 2019), and what a way to do it. Emmanuele Zurlo’s acrobatic winner with the final kick of the game completed the Azzurri comeback. The forward scored a wonderful hat-trick with each goal coming at a crucial time in the match. This game takes him up to 112 goals for the national team and eight at this tournament.

Italy were without striker Gabriele Gori for half of the match due to an injury after he had skied a penalty in the first third when the scores were level. But the rest of the team rolled up their sleeves and got the job done with a magnificent performance. Coach Emiliano Del Duca gave his thoughts on the game: “I opted to play with a 2-1-1 block in the first half of the game in order to block the Swiss wing-play; they’re always very good at passing it forward thanks to their keeper. I gave up the wide portions of the pitch to some extent but when I saw that they were tiring I asked the guys to rotate with a greater intensity and we took control of the game. The rest was all heart from these great guys; they’ve shown their desire to win out there on the sand.” 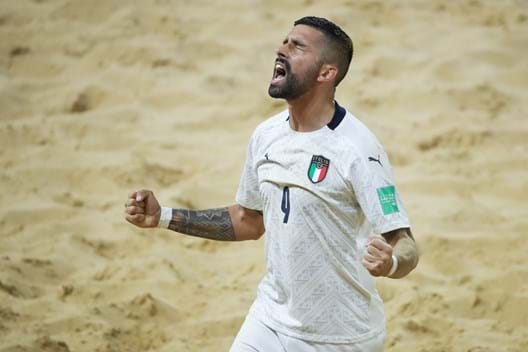 It was a game full of twists and turns. Ott scored twice for the Swiss in the first twelve minutes of the match. Those goals came either side of Josep Jr’s first goal at the tournament as he powered the ball across the keeper and into the back of the net. But nonetheless it was Switzerland who had started the game the better side. Gori’s missed penalty made Italy fans wonder if it was going to be one of those days. Gori and Frainetti came close to equalising for the Azzurri at the beginning of the second third before Mo put the Swiss further ahead in the eighth minute of the second period with an unstoppable acrobatic volley. Italy found themselves two goals down and without their talisman Gori.

In the absence of Gori, it was Emmanuele Zurlo who stepped up to plate for Italy. He got Italy back in the game as he scored a bicycle kick having juggled the ball up for himself. Dario Ramacciotti then scored Italy’s equaliser with a left-footed strike from out wide. A first goal of the tournament for the ‘Heron from Torre del Lago’. After that it was Italy who controlled the game. Ramaccciotti hit the bar and Eliott managed to keep out an attempt from Percia Montani but he was rendered a helpless spectator by Zurlo’s fantastic long-range overhead strike which put Italy into the lead for the first time in the match in the seventh minute of the final third. However the joy was short-lived as Borer hit a thunderous strike past Del Mestre. But that goal didn’t deter Italy, who kept pushing forward. Zurlo threatened Eliott’s goal, Ramacciotti hit the woodwork again and just a few moments before the final whistle Italy got their reward. Del Mestre provided the pass for Zurlo’s winner, putting him level on assists with Ramacciotti (five). Italy will face Russia in the semi-finals on Saturday at 20:15 CET; their opponents pulled off a shock and beat the reigning champions Brazil to progress. The Italian curse continues for Switzerland, who in three World Cups have never beaten the Azzurri, who have now beaten the Swiss 17 times. That was their 210th victory in their overall history. 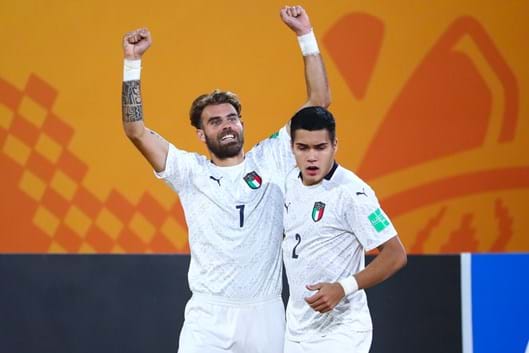