Italy’s next game comes on Thursday 28 November at 23:25 CET

Italy finish first in Group B after the wins over Tahiti and Mexico in the Group Stage of the Beach Soccer World Cup in Paraguay. This is the sixth time that Italy have progressed through the first round in the eight times they have participated in the tournament, only failing to progress past the group stage in 2006 and 2007. Emiliano Del Duca’s side find themselves up against Switzerland in the quarter-finals, who finished second in Group B. 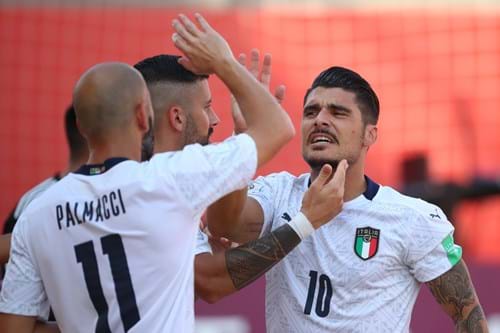 The record of previous encounters between the two nations is an extremely balanced one. Out of their 31 games, the Azzurri have won 16 whilst the the other 15 have gone to the Swiss, with 156 and 150 scored by each side respectively. Italy have won both of the two World Cup matches between the two sides, as well as winning the most recent meeting between the two as Italy won the third-fourth play-off 6-4 at the World Beach Games qualifiers last May in Spain.

This is Switzerland’s sixth World Cup, their best ever finish coming in 2009 as they lost to Brazil in the final. Schirinzi's side reached the quarters in 2015 and 2017, and didn’t progress through the Group Stage in 2011. Despite all of the precedents between the two teams, they have never met in a final. Switzerland’s biggest achievements are the European title in 2012 and a bronze medal at the most recent European Games in Minsk.