Coach Del Duca’s side hit six in their third and final game of the Group Stage: Gori gets five

Italy progressed through the first round of the Beach Soccer World Cup in Paraguay as they came away with a resounding 6-2 win over Mexico in the final game of the Group Stage, securing a place in the quarter-finals of the competition for the sixth time in history. Italy dominated the game from the first minute to the last, having already secured the win after just two thirds with the score at 6-0, making the most of the final third to manage energy levels and rest key players. Gabriele Gori put in yet another man of the match performance, scoring five stunning goals. “Tin Tin” moves up to 13 goals in the competition, 289 for the Azzurri, 80 in 2019 and 39 at World Cups. Ramacciotti and Chiavaro’s assists can also not be overlooked, with both coming close to scoring on plenty of occasions. Captain Corosiniti was another to almost get his name on the scoresheet on what was his 260th appearance for the Azzurri. Emmanuele Zurlo scored Italy’s sixth with a free kick from a tight angle, his fifth goal at this World Cup and 109th of all time with the National Team. 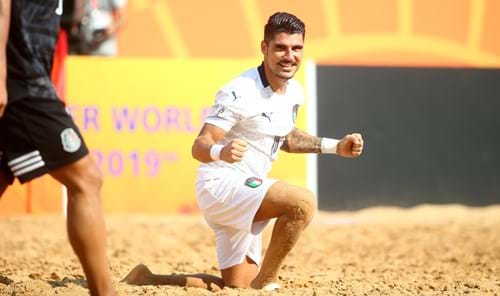 This second win in the group takes Italy up to six points, now safe from being caught by third. The Azzurri will have to wait to see the result from Uruguay vs. Tahiti tonight to find out their final position in the group: the South Americans just need a win of any kind to take first place, while if Uruguay lose then Italy take top spot. Tahiti would need a win in regular time by at least three goals to leapfrog Uruguay to second place and leave first to the Azzurri. Should Italy come first then their quarter-final will come on Thursday 28 November at 23:25 CET against Switzerland. Should they finish second then their next game will be on Friday 29 November at 01:00 CET against Japan.

Having hit their first objective, Coach Emiliano Del Duca was understandably satisfied with the performance: “We’re among the best eight nations in the world, that’s already a good achievement. I’d like to thank the guys for what they have given so far. You can’t take anything for granted at a World Cup, if we look at the other groups some big names have really struggled to cope with this competition where there are no easy opponents.”

Great determination on the part of veteran Simone Del Mestre: “This is my fifth World Cup, but I’m living it as if it were the first. We’re here to improve on our fourth place from last time. We know that it won’t be easy, but we all have the ability to aim high. Against Mexico we played to win and we didn’t give them a chance.”

Gabriele Gori was man of the match once again: “We showed that we were just unlucky in the game against Uruguay. Just like against Tahiti, we were fully focused from start to finish and we dominated the match completely.” 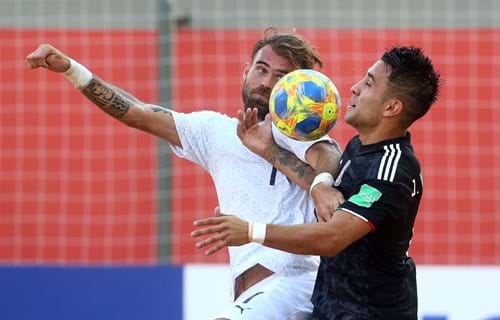 *One game in hand